Still ticking over despite the weather... 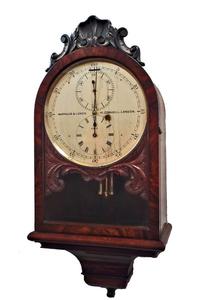 The Met Office has now officially pronounced last month to be the wettest February since records began, and this has not made life easy for many of us.  Consequently, we found ourselves working harder than ever to bring this sale together, with furniture in the rain, house visits in the rain and driving through the floods of Worcestershire and along the Berkeley Vale.  However, as always, we did it - some 1,300 lots were assembled and were met with strong demand from our buyers.

The top priced individual piece came in the form of a 19th century Barraud & Lunds single fusee regulator wall clock in a mahogany case which sold at £4,600.   The best of the watches, a good 1950s Rolex oyster perpetual chronometer in stainless steel, sold at £2,300. An antique bronze figure of Guanyan buddha seated on a recumbent elephant sold at £1,750 and a small collection of six 19th century paperweights sold in three lots for a total of £3,630 and an unusual collection of miniature ceramics, mainly English, and in the form of watering cans, cups and saucers, plates, tureens, teapots, etc, attracted wide interest, with the ten lots totalling £2,020.

Silver and silver plate items once again found favour, and virtually every lot sold, with the sections totalling just under £9,000.  Jewellery, as usual, performed well with a 9ct gold charm bracelet at £960 and other pieces selling well over estimate.  After January’s collection of gold coins that totalled £80,000, a stronger than usual section of coins was presented from several clients including a 1692 William & Mary half guinea at £640 and numerous sovereigns consistently making over £250.  The coin section totalled £8,550.

Amongst the paintings a half-length portrait of a seated young woman by Myra E Luxmoore made £1,650, despite the canvas being in need of restoration.

Carpets and rugs saw an almost total clear out, with all sizes finding favour, the section totalled around £3,500.

The furniture trade seems to be strengthening at all levels and with this section showed few unsold lots.  Top selling items included a Victorian mahogany snooker/dining table with reversible top at £860, the best of the pedestal writing desks at £1,350, the best of the library tables at £920 and a Victorian burr walnut wellington chest at £900.

This sale was followed a few days later by an on- site sale near Tetbury of surplus building materials.  The top price here was £13,500 paid for ninety square metres of Cotswold tiles, which had been in store for many years.  This was followed by £1,000 paid for two forty-foot steel containers and £860 for an Ifor Williams tipping trailer.  The residue of the sale consisted of building stone, tiles, bricks, etc.

The next sale at Wotton-under-Edge will be on 24th & 25th March and will include a quantity of the probate instructions taken over the winter period.