In addition to our large monthly sales, the next few months will include the following: 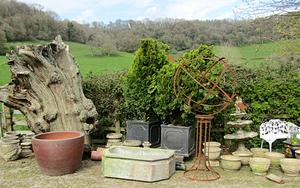 On Saturday 7th May we have the annual garden and architectural sale, which has grown year on year and will include reclaimed garden statutory, planters, stone troughs, staddle stones, benches, gates and stoneware, as well as the completely unexpected!  Entries are now being accepted; please speak to either Andrew Pederick or Philip Taubenheim if you would like to consign.  Last year's results were remarkable; some 94% of the five hundred lots found buyers.

We have been favoured by executors with instructions to sell a highly important stamp collection. This is being catalogued and photographed now and comprises principally of British stamps from the earliest period.  Many single examples are likely to realise several thousand pounds each and will include extremely rare examples of early postage stamps, misprints, errors, etc.  Once catalogued the fully illustrated listing will be online for some weeks, at a date yet to be announced.  The sale is likely to be take place in the late Spring and it is anticipated the collection will comprise of around three hundred plus lots, with a total value of more than £200,000.

Following that, in July we will see the 20th century art collection of the late Arnold Root being sold, some two to three hundred lots including such names as Ben Nicholson, John Piper, Julian Trevelyan, Bernard Cheese, Edward Bawden, Bridget Riley and others, further details in due course.

In the meanwhile, the next collective sale here will include a large volume of antique furniture which has been stored for several years, a larger than average toy section, as well as the unexpected lots that make these salerooms something different from the ordinary with an increasing following.